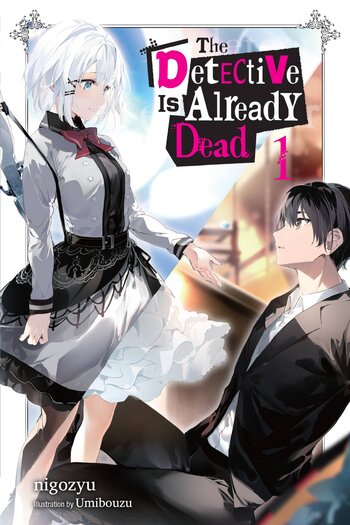 The Detective is Already Dead (探偵はもう、死んでいる。, Tantei wa Mō, Shinde Iru.), is a light novel written by Nigojū with illustrations done by Umibōzu, published by Media Factory in Japan with five volumes out. Its English release has been licensed by Yen Press. For the manga version, Mugiko has done the illustrations. Likewise, Yen Press has licensed the manga alongside the light novel version. An anime adaptation was done by ENGI with the first episode aired on July 4, 2021 as a one-hour special. It was announced that it will see another season.

Kimihiko Kimizuka is an average middle school student who happens to be Born Unlucky and constantly seems to attract the worst kind of attention possible. One fateful day, he is recruited by a teenage detective named Siesta to serve as her assistant in the course of her work, and they enjoy a memorable 3 years of adventuring and going on investigations together. The good times end, however, when Siesta is killed in an investigation of a secret criminal organization called SPES that consists of pseudohumans. One year after her death, Kimihiko, now a high school senior, is trying to manage ordinary school life as he tries to move on from his loss... until SPES resurfaces again and he is roped back into the fight against them.

Definitively not related with Fist of the North Star, especially with Kenshiro's catchphrase.

The Detective is Already Dead

The Detective is Already Dead