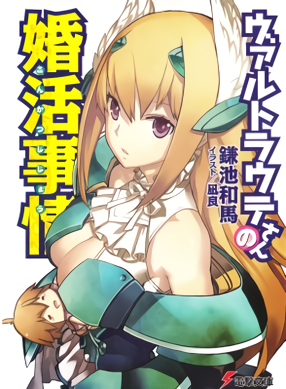 Waltraute and a chibi Jack.
Advertisement:

The Circumstances Leading to Waltraute's Marriage is a Light Novel written by Kazuma Kamachi in 2012, who is best known for A Certain Magical Index.

Waltraute, the fourth of the nine Valkyries, travels to Midgard on a routine mission. A human boy named Jack Elvan sees her and instantly falls in love, begging her to marry him. Annoyed, but not wishing to harm him, she says she will marry him if he can climb the World Tree Yggdrasil all the way up to Asgard with his own strength. To her shock, he takes the impossible challenge seriously and succeeds (sort of, see below). She keeps her word and they are married, and more adventures follow.

A fan translation of the light novel can be found here

Kazuma Kamachi wrote a novel that crosses over all his novels called The Circumstances Leading to a Certain Magical Heavy Zashiki Warashi’s Simple Killer Princess's Marriage. The characters from the other novels find themselves in Waltraute and Jack's world and have to work together to save the day.