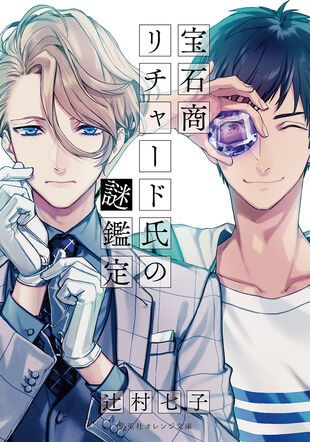 Main characters, Richard (left) and Seigi (right).
"Everybody is granted their own world. The difference is whether you turn your back on it, or whether you nurture it into something rich with life, as if it were your own ocean. You said earlier that this was like drawing your fortune at a shrine, but gemstones act as a mirror of their owner's soul. It is not something that exists to lead you to an answer you do not wish for."
— Richard Ranasinghe de Vulpian
Advertisement:

One night, while returning home from his job, university student Seigi Nakata rescues a beautiful British man named Richard Ranasinghe de Vulpian from a group of drunks. Richard is a jeweler who travels the world selling jewels to clients and hires Seigi to work in his Japanese shop part-time, beginning their partnership uncovering mysteries behind the jewels and customers they encounter.

The Case Files of Jeweler Richard is an ongoing novel series written by Nanako Tsujimura with cover illustrations by Yukihiro Utako, which began publication in 2015. It received an anime adaptation in January 2020 by Shuka. A manga adaptation illustrated by Mika Akatsuki started serialization in the Monthly Comic Zero Sum magazine in November 2019.

The Case Files Of Jeweler Richard shows examples of: