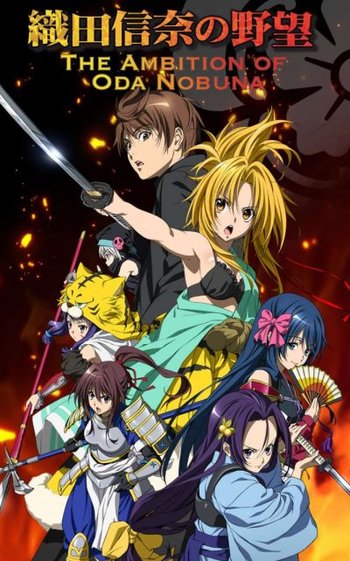 "It is the age of the civil wars. The land is divided by powerful warlords, who constantly fight each other. Any internal power struggle is an invitation for your neighbors to attack. So it is decided that the firstborn child, regardless of gender, would become the head of the family. The result of this was the birth of the Princess Generals."
— Opening Narration
Advertisement:

Suddenly finding himself in the Sengoku Jidai, Ordinary High-School Student Yoshiharu Sagara is about to be killed on the battlefield. He is saved by none other than the man who later becomes the respected Toyotomi Hideyoshi but at a cost to the latter's life. With history completely changed because of Yoshiharu's actions, he tries to make things right again, but it seems that history is taking a different course than the one he learned in school. Oda Nobunaga is now a brilliant but young girl named Oda Nobuna. Yoshiharu starts working under her command, who nicknames him "Saru", to bring back history to its correct course and find his way back home to the present world.

The Ambition of Oda Nobuna (織田信奈の野望, Oda Nobuna no Yabou) is a Japanese light novel series by Mikage Kasuga. It was adapted into an anime television series that premiered on July 9, 2012.

It can be watched legally in some countries on Crunchyroll.

Baka-Tsuki has a translation project for the light novels here

While the title is based on a pun of the KOEI game Nobunaga's Ambition (Nobunaga no Yabou), they have nothing in common except the 'Sengoku' setting.