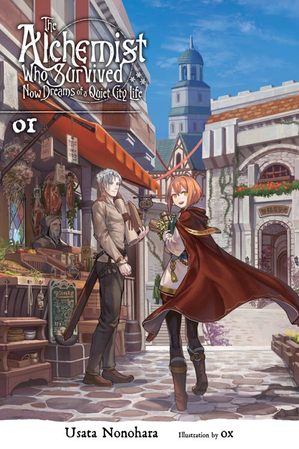 Mariela is a young girl who is one of the many alchemists living in the Kingdom of Endalsia. However, when the capital city was rampaged by a horde of monsters in an event known as "The Stampede", she used her magic to put herself in suspended animation in hopes of wading off the invasion. She wakes up to find that she survived, but the spell worked out too well. She slept for two centuries, and is surprised to find that Endalsia has changed a lot in that time. In addition, Mariela finds out she's the last surviving alchemist in the Kingdom.

With nothing else to do, Mariela seeks to rebuild her previous lifestyle back in the vastly-changed kingdom, and along the way, she meets a couple of new friends on her journey. A new chapter in her life as an alchemist begins.

The Alchemist Who Survived Now Dreams of a Quiet City Life is a fantasy light novel series written by Usata Nonohara and illustrated by Ox. Published in Japan on July 30, 2019, and later localized in the west by Yen Press on October 15 of the same year, the series stars Mariela; a young alchemist girl who only seeks to return to her normal life. A manga adaptation is also available.