Light Novel / That Time I Got Reincarnated as a Slime 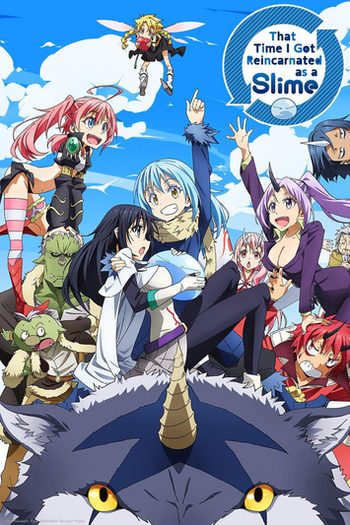 After dying while protecting his junior colleague at work from a knife attack, Satoru Mikami is reincarnated as a slime in a magical world. As someone who is reincarnated, he gains the Skills "Predator" and "Great Sage". While strolling around, he meets the Storm Dragon Veldora who becomes his friend and names him Rimuru. In return, Rimuru gives the surname Tempest to both of them and agrees to snatch Veldora from his prison so that one day they can permanently break Veldora's prison. The mysterious disappearance of the Storm Dragon results in huge consequences as his presence acted as a sort of buffer zone. Meanwhile, Rimuru starts his adventure by traveling, meeting new people, fighting some of them, and turning them into allies by fighting them. He is guided by a mysterious interface, the Great Sage, which teaches him how to use his unique skill, "Predator", an almost limitless ability to eat and assimilate living things and objects. Rimuru begins to adopt the forms and abilities of everything he absorbs, which makes him very strong, but also a target.

That Time I Got Reincarnated as a Slime (Tensei Shitara Slime Datta Ken) is a series of web-novels turned light novels by Fuse and illustration by Mitz Vah. This series is adapted to manga by Taiki Kawakami and an anime by Studio 8 bit. On September 21, 2021, following the conclusion of Season 2, a movie was announced for release Fall 2022.

It also spawned Spin-Off Manga including:

There was also a crossover event for Last Cloudia.

That Time I Got Reincarnated as a Slime provides examples of the following:

Alternative Title(s): Tensei Shitara Slime Datta Ken, That Time I Got Reincarnated As A Slime