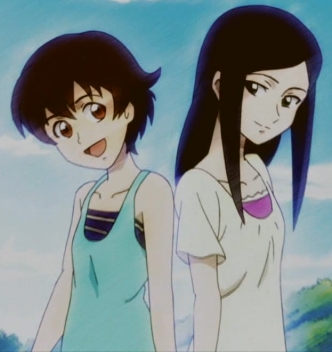 Ran & Midori
Isozaki Ran is an energetic and sporty middle school student who had the gift of premonition since she was a little kid. Her powers really come into fruition once she meets Naha Midori, a girl who transfers into her school and attends the same class she does. Actually she had already heard the girl's voice in her head before that, saying "I found you" and that "it will begin very soon".
Advertisement:

Ran discovers through her interactions with Midori that she has tremendous telepathic and telekinetic powers, just like Midori herself. The only trouble is that the two girls don't hit it off well at first. They get a mutual understanding though once they decide to face an adversary with similar abilities, who at one point kidnaps Rui, Ran's boyfriend who possesses certain powers as well.

The series, fully called Telepathy Shoujo Ran Jiken Note, describes how Ran deals with her newly found abilities and how it affects her relationship with her friends and family, mostly in an "adventure per episode" format. The stuff Ran, Midori and Rui have to deal with ranges from fairly mundane school troubles, through low-key detective work to run-ins with local godhoods.

The show, which NHK aired in the latter half of 2008, is generally light-hearted family fun, with a strong-willed female lead and ditto friends.