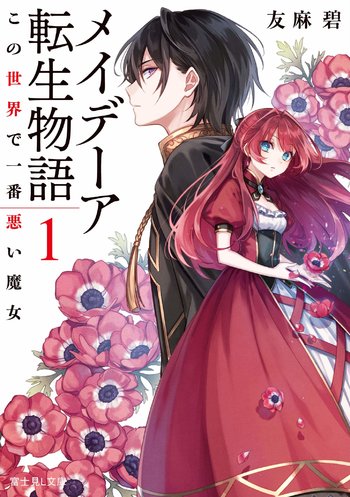 Makia O'Drielle is the daughter of the noble O'Drielle family, who are the descendants of the infamous Scarlet Witch, who is known in the world of Maydare to be the "world's worst witch." On her tenth birthday, she saves a young boy from slavery after witnessing his incredible magical abilities and names him Thor. He is taken into the family as an apprentice and as Makia's knight, and the two of them become close friends.
Advertisement:

However, everything changes one night when Thor is chosen as one of the Guardians of the Savior, a person from another world who is destined to save Maydare. At the same time, Makia regains the memories of her past life as a high school girl from modern-day Japan. The two are split apart, but Makia is determined to reunite with him again and tell him her true feelings, and does so by enrolling into Lune Ruschia Magic School, the most prestigious magic school in the world.

Tales of Reincarnation in Maydare (Maydare Tensei Monogatari) is a light novel series by Midori Yuma (author of Kakuriyo: Bed and Breakfast for Spirits) and illustrated by Esora Amaichi. The series is actually a remake of an earlier series where much of the same concepts carried over. A manga adaptation drawn by Nana Natsunishi is currently serialized in Square Enix's GFantasy magazine.