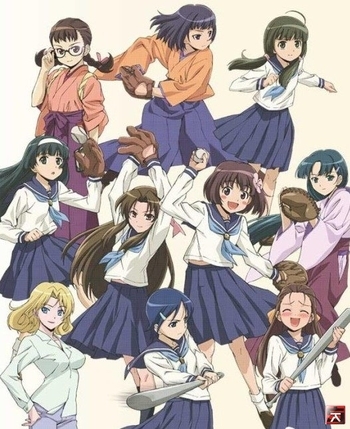 1925, Japan. The Taishou era is nearing its end, an era that increased the western influence of the Meiji era. Among other things, the now ever-present "sailor uniform" was introduced in 1920. Another sign of the times was the feminist movement, which began to gain traction. However, Japan is still a very patriarchal society, and even running is seen as a vulgar thing for women to do.

It is to this backdrop that Taishō Baseball Girls (Taishou Yakyuu Musume) is set. A middle school student named Akiko Ogasawara is at a party held by her father, wherein the subject of feminism is brought up by one Sousuke Iwasaki. After he voices sexist views to Akiko, she becomes angry. She decides to beat Iwasaki at his own game — baseball. Together with her friend Koume Suzukawa, she tries to gather an all-girls baseball team. However, there are many obstacles in the way — finding enough members, learning how to play, continuing in the face of humiliating defeats...

Based on a light novel by Atsushi Kagurasaka. Animated by J.C.Staff. Compare with Princess Nine.