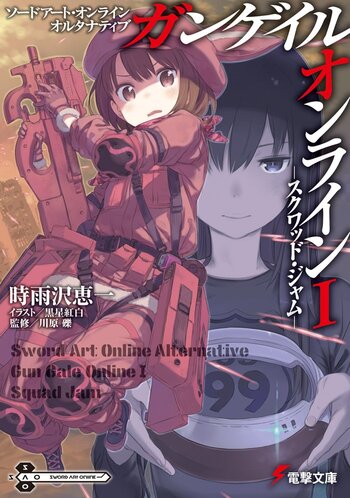 Welcome to the World of Guns!
Advertisement:

Sword Art Online Alternative Gun Gale Online is a Light Novel series written by Keiichi Sigsawa with illustrations done by Kouhaku Kuroboshi under supervision by Reki Kawahara. A spinoff from Sword Art Online, existing in the same Shared Universe but taking place in the virtual world of Gun Gale Online. It centers on a Tokyo university student named Karen Kohiruimaki, who's insecure about her height and an introvert. One day, she decides to join GGO on the advice of a friend in order to improve her self-esteem, using the name LLENN. Along the way, she makes friends as she plays the game with other GGO players and fight against hostile players aka PKers and monsters.

It consists of a light novel series, published by Dengeki Bunko, with a manga adaptation by Tadadi Tamori under ASCII Media Works and serialized in Dengeki Maoh, which started in 2015 and an anime television series adaptation by studio 3Hz, which premiered on April 8, 2018 in Japan under Tokyo MX, BS11, GYT, GTV, MBS, TVA and CS NTV Plus. The first two are licensed by Yen Press (the LN under the Yen On label) for English-speaking countries. For the anime, Aniplex is releasing it for North America, Spanish-speaking countries and Poland. French and German-speaking countries can watch this under Wakanim.tv. As of 2020, it is also on Netflix.

The show is also available in Crunchyroll and Hulu for legal streaming in some territories. It's also seen on and off on Netflix.