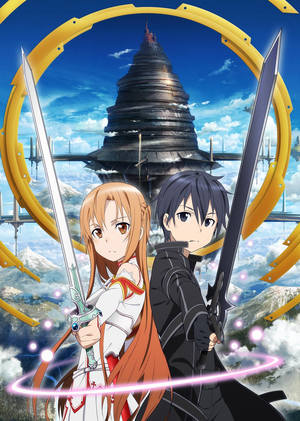 Link Start!
"I will survive in this world!"
— Kirito
Advertisement:

The light novels have been licensed in the U.S. by Yen Press for release beginning in April 2014.

Asuna and Kirito (Pictured above) were chosen to represent Sword Art Online in the crossover Fighting Game Dengeki Bunko: Fighting Climax by Sega, with Suguha Kirigaya (Leafa) as one of the support characters; later, Yuuki Konno from Mother's Rosario was introduced as a playable character in the Ignition Updated Re-release, with Karen Kohiruimaki (LLENN) as a support character; with three playables and two support, SAO became the series with the most representation in that game.

The Iconic Battle Sequence from the First Season of Sword Art Online where Kirito defeats the Gleaming Eyes boss with his 16-Hit Signature Sword Skill Combo.

The Iconic Battle Sequence from the First Season of Sword Art Online where Kirito defeats the Gleaming Eyes boss with his 16-Hit Signature Sword Skill Combo.