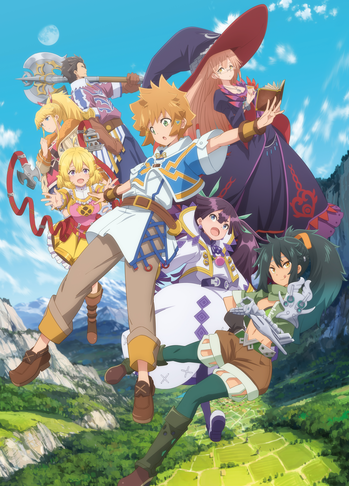 He's Not Your Ordinary Hero
Advertisement:

Lloyd Belladonna is a boy from the remote village of Kunlun who dreams of great things, such as being a soldier and fighting off demonic armies for the Kingdom of Azami. With the blessing of the village mayor, Alka, he heads for the royal capital to live with Marie, a young witch running an apothecary on the eastern side of the city and a former pupil of Alka.

This presents trouble for Marie for two major reasons: firstly, despite claiming to be a weakling, Lloyd is already extremely powerful by the standards of Azami... because his hometown just so happens to be located on the borderlands between the human and demonic realms, and he is descended from generations of heroes who settled there to serve as vanguards against demon invasions; and second, he has little in the way of common sense, doing such outlandish stuff as using advanced magic spells for housekeeping.

Suppose a Kid From the Last Dungeon Boonies Moved to a Starter Town (たとえばラストダンジョン前の村の少年が序盤の街で暮らすような物語, Tatoeba Rasuto Danjon Mae no Mura no Shōnen ga Joban no Machi de Kurasu Yō na Monogatari) is an ongoing 2017 light novel series written by Toshio Satō and illustrated by Nao Watanuki, published by SB Creative under its GA Bunko imprint. It also has an ongoing 2017 manga adaptation illustrated by Hajime Fusemachi published by Square Enix at the Gangan Online magazine, as well as an anime adaptation of the first five volumes directed by migmi for Liden Films, which started airing on January 4, 2021.

Alternative Title(s): Suppose A Kid From The Last Dungeon Boonies Moved To A Starter Town