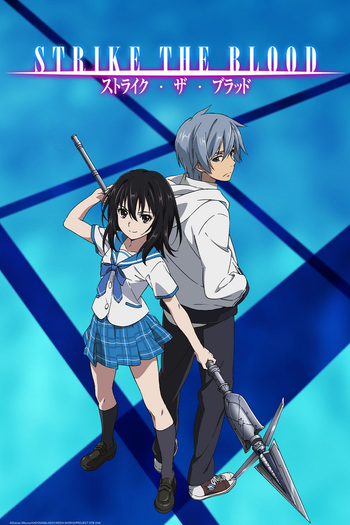 The Fourth Progenitor—That's the world's strongest vampire that should only exist in legends. Accompanied by twelve Familiars and spreading chaos and mayhem, this phantom vampire has now appeared in Japan. In order to deal with potential threat, the government and the Lion King decided to dispatch a Sword Shaman to keep an eye on him, and kill him if he becomes a threat. However, for some reason, the one chosen for the observation was an apprentice Sword Shaman girl, Himeragi Yukina. Wielding the strongest anti-progenitor spirit spear, Yukina arrived at Demon District, Itogami City. What will she find when she encounters the Fourth Progenitor, Akatsuki Kojou?!

Both the light novel and its manga adaptation are published in English by Yen Press.

Yukina was chosen to represent Strike The Blood in the crossover Fighting Game Dengeki Bunko: Fighting Climax by Sega, with Koujou Akatsuki as one of the support characters.

Strike the Blood provides examples of: