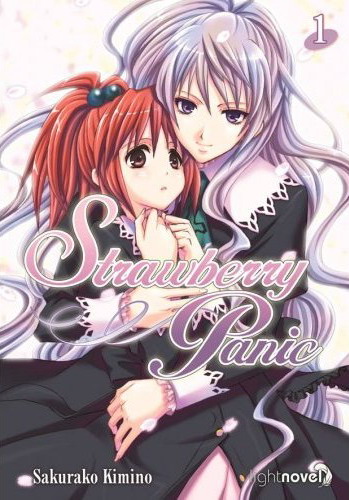 ...completely derivative yet oddly enjoyable [series], which is best known in yuri circles for stealing characters, symbols and whole scenes from well-known yuri anime and manga series, putting them all into a blender and emerging with the anime version of a Long Island Iced Tea.
— Erica Friedman's Guide to Yuri

Nagisa Aoi is a New Transfer Student at St. Miator high, one of three Elaborate University High girls-only schools on Astraea Hill. The three schools share a common set of "strawberry-shaped" dorms, as well as a reputation for "lesbian romances". On her first day, Nagisa stumbles into Shizuma, a mysterious figure known as the "Etoilé", and finds herself uncontrollably drawn to her. In turn, her new roommate, Tamao, becomes close best friends with Nagisa.

Strawberry Panic! finds its origin in a series of illustrated short stories by Sakurako Kimino and like most series with its setting, it deliberately evokes a shoujo-like artstyle and pacing, (though being released near the MariMite anime certainly invites a specific comparison).

A major departure is the series knowing its seinen cute-loving fanbase and treating its melodrama, clichés, characterization, and male-free Love Dodecahedrons with absolute straightforwardness to the point of a stealth parody. This fact can sometimes turn people off, but after realizing that the series is fundamentally poking fun at the genre (while still delivering an enjoyably sappy love story in its own right) it can be quite enjoyable.

One thing to keep in mind when watching is understanding the series developed from a rather unusual process, and all of the couples are based on reader polls done in the magazine in which the light novels were originally published. This makes some of the more ridiculous pairings more understandable, since the writers had to try and find a way to make the pairings that the readers wanted. Considering what they had to work with, the series is truly a tribute to its fans, but its level of fanservice is quite a few shades lighter than most similar series.

The anime in particular has proven to be a very divisive series, with many detesting it for its stereotype characters, simple plot and ridiculous scenarios, while many love it for its genuine "Pure Love Story" style (in an academic sense, a sort of Neo-Dolce Stil Novo), great amount of character development, and moments of true drama.

Not to be confused with Full Metal Panic!! For Sakurako Kimino's other work, see Sister Princess.