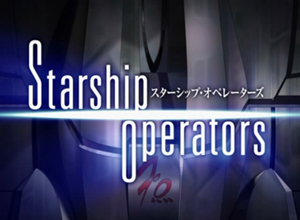 "The Amaterasu's greatest weapon is its audience."
-Sinon Kouzuki
Advertisement:

A 2005 anime adapted from (most of) the light novel by Ryo Mizuno, creator of Record of Lodoss War and Rune Soldier Louie, that is a rather hard science fiction. It aired in Japan via TV Tokyo from January 5 to March 30, 2005.