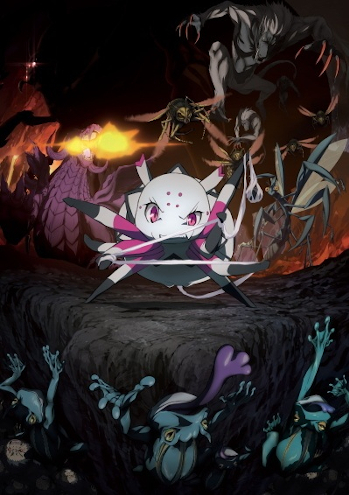 No way! Why am I a spider!?
"Well, though I hate to admit it, I've been reincarnated as a spider."
— Chapter 1
Advertisement:

So I'm a Spider, So What? (Kumo desu ga, Nani ka?) is a Web Serial Novel series written by Baba Okina. In an alternate world, as their final act, a great Hero and Demon King unleash a cataclysmic magic. Said magic tears through dimensions and erupts into a Japanese high school classroom, killing everyone inside instantly. But instead of staying dead, those present find themselves reincarnated into the alternate world.

In a subversion of the usual Isekai story, our protagonist is a quiet, lonely girl who is reincarnated not as the next Chosen One... but as a spider. No, not a Cute Monster Girl spider, but the lowest level of spider monster Mook that you would kill in a starter RPG cave. Now she has to use all her wits in order to survive in the world's deadliest labyrinth.

The series has been adapted into a Light Novel and Manga that unlike the other media is told only from Kumoko's perspective, both of which have been licensed by Yen Press, and an Anime Adaptation by Millepensee Inc which began airing on January 8, 2021. Also has a Spin-Off manga series, So I'm a Spider, So What? Daily Life of the Four Spider Sisters, where four Literal Split Personalities the main character generated with a skill partway through the story gain their own independent bodies. Hilarity Ensues.

Kumoko and the revenge monkeys

Notice Kumoko's lack of enthusiasm as she realize several dozens of monkeys want to take her down.

Alternative Title(s): Kumo Desu Ga Nani Ka, So Im A Spider So What

Kumoko and the revenge monkeys

Notice Kumoko's lack of enthusiasm as she realize several dozens of monkeys want to take her down.