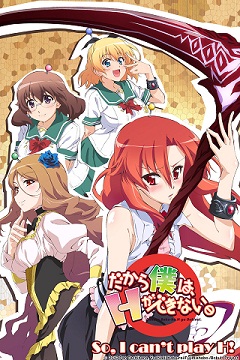 High school student Ryousuke Kaga is an insatiable, but chivalrous, pervert. It's even earned him the name ErosukeTranslation Ero in this context means Perverted. Essentially "Pervsuke". His mostly mundane life, accompanied by his best friend, Mina Okura, was interrupted one rainy afternoon when he encountered Lisara Restall standing in the rain. Doing his best to ignore her translucent, wet clothing, he gives her his umbrella and invites her to dry off back at his house.

It's soon revealed that Lisara is an elite shinigami from the magical parallel dimension of Grimwald, a whole world of Grim Reapers. Needing energy to maintain her presence and strength, she makes a temporary spirit contract with Ryousuke by stabbing him with a Soul-Cutting Blade. After a harrowing, sudden combat scene from a Grimwald monster who followed her, Lisara informs Ryousuke he doesn't have long to live. Promising to resurrect him if he serves as her energy source, Ryousuke agrees, but Lisara is blindsided by the source of his particular energy - eroticism!

Unwittingly powered by his libido, Lisara finds herself the constant object of the Male Gaze and Ryousuke's desires. Together, they embark to find The Chosen One and use that person's power to power Grimwald and save Ryousuke's life.

So, I Can't Play H!, known in Japan as Dakara Boku wa, H ga Dekinai, is a series of Light Novels which were published from 2011 to 2013, with a total of five volumes. It received an anime adaptation during the Summer 2012 Anime season.

Not to be confused with High School D×D, which started airing an anime around the same time with a similar red-haired Magical Girlfriend.