Light Novel / Slave Harem in the Labyrinth of the Other World 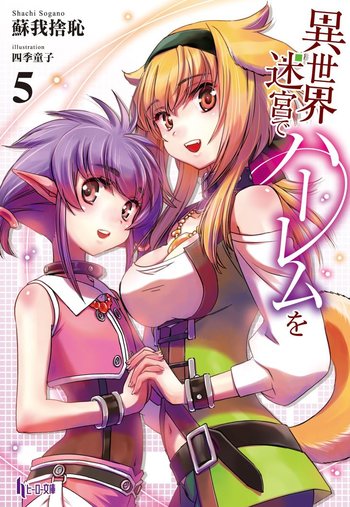 These are just the first.

Michio Kaga was about to commit suicide and decided to search for a way to die on the internet, but then he found an odd site that asked a lot of questions and had a point-based system that allows you to create skills for a character. He took interest in it, and when he was done setting his character, he was asked, “You will now be transported to a world with the settings you chose. Coming back is not possible. Do you still accept?” Without thinking much of it, he pressed YES and found himself in another world with the skills he chose to have.

Slave Harem In The Labyrinth Of The Other World (異世界迷宮でハーレムを; Isekai Meikyuu de Harem o) is a 2011 fantasy Light Novel series, written by Sogano Shachi and illustrated by Shiki Douji. It was adapted into a Seinen Manga in 2017 with art by Hyouju Issei. It is serialized in Kadokawa Shoten's Shounen Ace magazine, and has been published in three bound volumes.

As of March 1, 2020, it has also recieved an officially published, licensed, and currently being translated, light-novel reboot.

Tropes found in the work include: