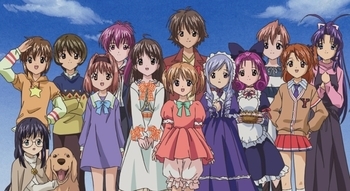 "Onii-chan, I love you!"
Advertisement:

When 15-year-old orphan Wataru Minakami fails to get into the high school on which he has set his heart, and to which his best friend has gained admittance, he finds himself launched unwillingly onto a journey of discovery and self-discovery. Forced by circumstances and the enigmatic adults around him to a strange island community off the coast of Japan, Wataru finds a place has been held for him at a local school, and quarters at someplace called "Welcome House".

When he arrives at Welcome House, though, he receives the biggest surprise yet — waiting there for him are a baker's dozen sisters he'd never known he had. And all of them, from 8-year-old Hinako to 16-year-old Sakuya, are eager and willing to lavish him with sisterly adoration.

Wataru soon finds himself overwhelmed by the unconditional love he is given by his sisters, leading him into a spiral of doubt over his ability to return it in proportion, and over his worthiness at all to receive it. Strange hints of memory add to the mix, confusing him as to whether or not he does remember ever having sisters. And one of the sisters isn't a sister at all, but the agent of a mysterious person who wants to see the happy family reunion demolished as quickly as possible.

A quirky, low-key series that definitely isn't for adrenaline addicts, Sister Princess was based on one of the odder "dating simulation" games that are quite popular in Japan. Some of the atmosphere of the original game is still here (the sisters' affection can be almost incestuous at times), but the producers have moved beyond it to create a gentle, sweet story set in a kind of Magic Realism world and filled with enticing mystery. It is a "harem show" in the loosest sense of the term, but differences are refreshing, and the entire thing is played only for the mildest of comedy.

The means and motives of the secret "villain" add a strange counterpoint of reality to offset the fantastic elements, but the blend works, and the final confrontation is surprisingly tense after the slow, low-energy buildup that takes you there.

Originally a series of light novels written by Sakurako Kimino (the writer of Strawberry Panic!), it was adapted into a manga series in 2001, followed by a game and two anime series. The first TV series aired in 2001, and was followed in 2002 by a sequel series called Sister Princess Repure.

The North American release of the first season was originally licensed and dubbed by ADV Films. Discotek Media acquired the licensing rights to both seasons in April 2018.