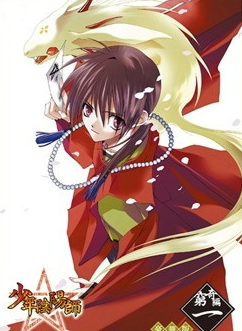 Shōnen Onmyōji is a series of Light Novels authored by Mitsuru Yūki with illustrations up to volume 47 done by Sakura Asagi, and by Itō Natsuo from volume 48 onward. The story has been serialized in Kadokawa Shoten's The Beans magazine since 2001.

A manga adaptation of the light novels was later produced, written by Hinoko Seta and published by Kadokawa Shoten in the magazine Monthly Asuka. First published on August 25, 2005, the manga is ongoing.

A further anime adaptation titled Shōnen Onmyoji: The Young Spirit Master, was later produced as well. Created by Studio Deen under the direction of Kunihiro Mori, the anime ran from October 3, 2006, to March 27, 2007, spanning 26 episodes.

The plot of all incarnations is set in the Heian era of Japan and follows Abe no Masahiro. He is the grandson of the great onmyōji, Abe no Seimei, though Masahiro lacks the ability to see spirits. The series follows Masahiro's quest to overcome being trapped in the shadow of his grandfather's image while fulfilling his promise to protect Princess Akiko of the Fujiwara clan and stop the hordes of demons invading Japan.