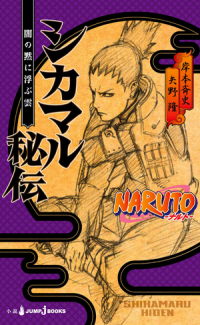 Shikamaru Hiden: A Cloud Drifting in Silent Darkness, written by Takashi Yano, is set two years after the end of the Fourth Great Ninja War and a few months before The Last. Shikamaru, a leading member of the Shinobi Union, is lamenting the fact that his life strayed so far from the "normal life" he dreamed of as a child. A strange message from Sai arrives, revealing a threat to the new-found peace in the face of Gengo, the leader of the Land of Silence. Shikamaru and two ANBU head out to investigate and, if necessary, assassinate this man.

"Naruto Hiden" (a.k.a. "Naruto Secret Chronicles"') is a light novel series which explores the stories of various characters after the conclusion of the original manga. Though each book is illustrated by Masashi Kishimoto, they are written by different authors. And yes, they are part of the canon continuity, plus they were adapted into episodes 489-493 of the Shippuden anime.

The english translation can be found here

note There is no adult content in the pages featuring the translated novels; it's just standard Reddit policy. A fair warning, however: those who stray too far in the twisted maze of Reddit may see things they wish they hadn't.. The translators' have requested to not copy or distribute the text.