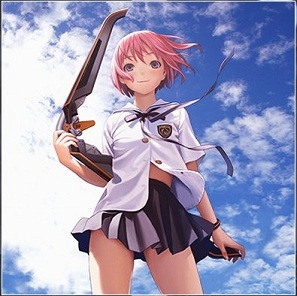 Shangri-La is a series of science-fiction (with supernatural elements) Light Novels written by Eiichi Ikegami in 2004 and 2005, which was adapted into a manga and an anime by Gonzo in 2009. An odd duck if there ever was one, proposing a world driven into poverty by carbon taxes,

into chaos by arbitrage

in carbon credits, and awaiting a savior — in the form of a Genius Ditz Magical Girl with a Precision-Guided Boomerang.

At some point in the near future, the UN tries to stop Global Warming by imposing extremely heavy carbon taxes. This has the effect of turning the world economy into one based entirely on the trade of carbon. Meanwhile, an earthquake destroys the entire Kanto region of Japan. Because Japan is now in a horrible economic situation, and the carbon tax hasn't been lifted, Tokyo is turned into an incredibly dense jungle. The plants there are supposed to absorb carbon dioxide from the air, reducing the taxes the country has to pay. Tokyo is rebuilt as Atlas, an enormous tower that can hold millions of people.

But of course, it can't quite hold enough people, so the majority of people have to live in villages in the middle of the jungle, where they're typically treated as second-class citizens by the elite living in Atlas. Things worsen when Ryoko Naruse, the President of the Atlas corporation, turns Japan into a virtual dictatorship with her in charge. The Prime Minister and Lord Hiruko, the nominal leaders of Japan, have become nothing more than her figureheads, while the common people must bow down to her every whim. The organization Metal Age opposes the construction of the tower for this reason.

The story focuses mainly on Kuniko Hojo, an 18-year old girl who lives in the city of Duomo, where she was brought to be the leader of Metal Age, even though she doesn't necessarily want to be their leader. Kuniko wants all people to have a higher standard of living, like what she hears Atlas is like, and devotes herself to pursing that goal, by whatever means necessary. And while Kuniko is trying to better the lives of everyone, those in power in Atlas are concerned with a prophecy of sorts, that requires that one of three people eventually inherit Atlas.