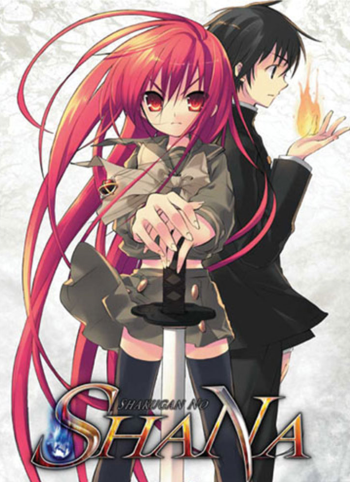 Yuji Sakai thought he was an Ordinary High-School Student... until time stopped one day and everyone around him was turned into light and consumed by a huge monster, right before his eyes. He was saved by a girl with long red hair who drove the monster off with sword and flame. "You don't exist anymore", she told him.

The Denizens of the Crimson World are monsters from another world who consume the "power of existence" of humans. The power of a human that is leftover becomes a Torch, a shell of their former self, destined to disappear without a trace — physical or mental — when their remaining power burns away. Flame Haze are independent humans who have allied themselves with the kings of the other world, gaining the power to fight back.

But Yuji is no ordinary Torch, and the minion fought that day is only the beginning of the troubles his city is about to face, as a powerful organization of Denizens called Bal Masqué, led by the Trinity and their god, the Snake of the Festival, set their sights on Misaki City, where the Snake will carry out his ultimate plan...

Shakugan no Shana ("Shana of the Blazing Eyes") is a series of light novels by Yashichiro Takahashi featuring illustrations by Noizi Ito, which was published by Dengeki Bunko from 2002 to 2012. The anime adaptation was produced by JC Staff and ran for three seasons: the first aired in 2005, and the second in 2007. A separate movie adaptation of the first novel was released in Japan on April 21st, 2007. Starting in October 2009, OVAs were released every four months or so under the name Shakugan no Shana S. The third and final season of the anime premiered in Fall of 2011.

The first season was licensed by Geneon and dubbed by The Ocean Group. The second and third seasons, as well as the movie were licensed and dubbed by Funimation.

A series of omake called Shana-tan and Hecate-tan have also been released which parody the events of the series with Super-Deformed characters. There are omake episodes for every season, plus the movie and Shakugan no Shana S, the first episode of the latter called (appropriately enough) Shakugan no Shana-tan G.

Shana was chosen to represent Shakugan no Shana in the crossover Fighting Game Dengeki Bunko: Fighting Climax by Sega, with Wilhelmina Carmel as one of the support characters.