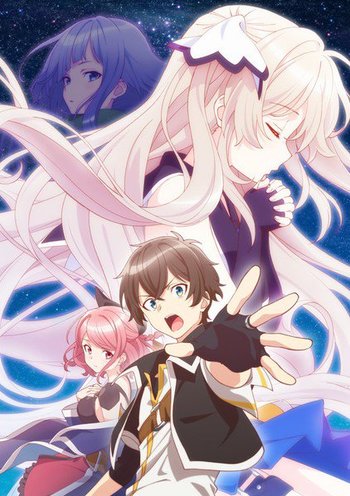 In 2034, there was a legendary party named Subaru in the globally popular MMORPG Union. The group was made of elementary school friends. They earned fame in the blink of an eye for their unparalleled abilities in the Sense system at the core of the game. However, there was an incident when a player passed away inside the game. As a result of the death, Union ended service. Six years passed. Haruto Amō, who was a key member of Subaru, has become a hopeless high school student. His personality has changed, and he has no friends or ambition. A classmate gets him to log in to the new Re'Union game, and he ends up having a "reunion" that is hard to believe. He meets his former in-game partner and real-world childhood friend Asahi Kuga. The girl who was supposed to have died six years ago was there.
Advertisement:

Seven Senses of the Re'Union (Shichisei no Subaru; 七星のスバル) is a Light Novel series, with an animated adaptation by Lerche for Summer of 2018.