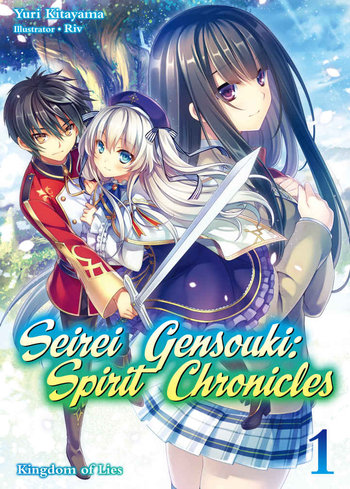 Spirit Chronicles (精霊幻想記; Seirei Gensouki) is an ongoing 2014 Web Novel series written by Yuri Kitayama, which was later adapted into Light Novel form in 2015 with Riv as the illustrator, as well as a Manga with Futago Minazuki as the artist in 2017; the latter two are currently licensed by J-Novel Club.

Amakawa Haruto, an ordinary boy in Japan, is separated from his Childhood Friend, Ayase Miharu, due to his parents' divorce. They promise to meet again one day, so Haruto works hard to eventually go to the same high school as her. Unfortunately, she and several students go missing, and are not found for five years, causing Haruto to live aimlessly for that time. After dying in a bus accident, Haruto is reincarnated as Rio, a homeless orphan in the Beltrum Kingdom, who seeks Revenge against his mother's rapist and killer. With the memories and skills of Haruto, Rio desires escaping the slums and work his way towards finding his arch-nemesis, but he'll first have to overcome Beltrum's unfair aristocratic system.

Note that the Web Novel and Light Novel diverge at multiple points in the story, and should be treated as different continuities, with this page covering the events of the latter.