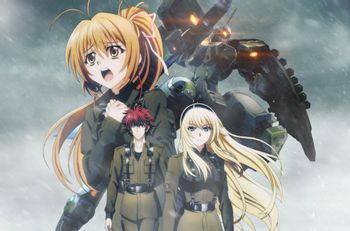 Katia, Theodor and Irisdina
"We believed in no God, and had no one else to believe in. Our only choices were to die on the battlefield, to die in the purges, or to live like machines."
"Even so... even so, all I could think of was that I wanted to protect you."
—Theodor Eberbach
Advertisement:

In 1973, at the height of the Cold War, hordes of aliens from deep space called BETA landed on Earth after slaughtering the human colonists on the Moon in a brutal, one-sided conflict. Facing an enormous, unstoppable horde of enemy forces with weapons making aircraft almost useless, mankind developed large humanoid fighting machines called Tactical Surface Fighters and deployed them to defensive lines throughout the world. However, all these efforts could do was stall the BETA temporarily, and Operation Palaiologos, a desperate, joint NATO-Warsaw Pact attempt in 1978 to seize a developing BETA hive in Minsk, Byelorussian SSR, ended in disastrous failure.

Five years later, in 1983, the BETA are on a rampage in Europe. With the Warsaw Pact moribund, and cut off from USSR support, the East German defense line at the former Polish border, the Oder-Neisse Line, is barely holding back the alien tide, and there the Nationale Volksarmee's 666th Tactical Surface Fighter Squadron "Schwarzesmarken" is tasked to stop the BETA, especially the larger Laser and Heavy-Laser class BETA as these provide heavy fire support for the other invaders. The 666th execute their mission without deviation; they are to disregard allied distress calls. They bring no succor to an army in dire straits, and thus are branded Reapers, Butchers, Death-speakers. In the meantime the Stasi, the feared Secret Police, ensures that the 666th, the premier NVA unit, is politically reliable to the government, not least by using its 101st TSF Battalion "Werwolf" under the infamous Major Beatrix Brehme to keep watch upon the squadron.

Unterleutnant Theodor Eberbach of the 666th, orphaned from childhood and put up for adoption, had lost everything— home, adopted family, and especially his adopted sister Lise in a Stasi purge. Unexpectedly released, he had nothing but the NVA to turn to, and enlists for pilot training. Tortured, broken, paranoid, he harbors hatred towards the Stasi and his commanding officer, Hauptmann Irisdina Bernhard, notorious for selling out her own brother to the secret police. But on the Oder-Neisse line and far behind— in Cottbus, in Berlin and beyond, past and present are seldom as they seem. Entangled in a web of lies and truth, of past and present, of persons and unpersons, Theodor is confronted with unavoidable choices— choices which may spell salvation or damnation for the frontline, East Germany, and Europe itself.

Written by Hiroki Uchida and with character designs provided by CARNELIAN (one of the founding members of âge), Schwarzesmarken is a light novel of the Muv-Luv franchise, and is a prequel to both Muv-Luv Alternative and Muv-Luv Alternative: Total Eclipse, the latter of which was replaced by Schwarzesmarken in serialization within Tech Gian. The light novel was followed in serialization by two side stories: Schwarzesmarken: Requiem, which focuses on the backstories of several side characters, and Bernhard im Schatten (Bernhard in the Shadow), telling of the siblings Jürgen and Irisdina Bernhard together with a young Beatrix Brehme.

An animated adaptation started airing in January 2016 as part of the Winter 2016 block.

Bring down upon the enemy's heads these Black Tropes: