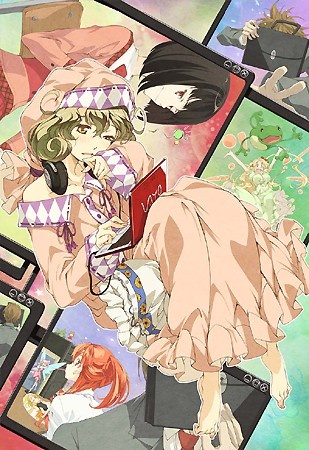 Sasami Tsukuyomi is a beautiful tenth-grade girl who happens to be a total shut-in, refusing to even go out of her house. She constantly relies on her doting older brother Kamiomi, a teacher in her school, to take care of her, including dressing her up, even though she despises his slavish devotion to her. She spends most of her time watching Kamiomi's daily life outside the house through her "Brother Surveillance Tool" and his interactions with the Yagami sisters — fellow teacher Tsurugi, who looks too young for her thirty-one years of age; Kagami, the middle sister, Sasami's classmate and a sleepy sixteen-year-old; and Tama, the youngest at age nine with a ridiculously hot body.

As it turns out, however, his life is not so ordinary, and that's what slowly motivates Sasami to start connecting with society.

Sasami-san@Ganbaranai ("Sasami-san@Dismotivation") is a light novel series written by Akira and illustrated by Hidari, published by Shogakukan under the Gagaga Bunko brand, standing at eleven volumes since 2009.

It is also adapted into a manga with illustrations by Akira Nishikawa and published in Shogakukan's Weekly Shonen Sunday from October 2012 to September 2013, as well as a 12-Episode Anime directed by Akiyuki Shinbo and produced by Studio Shaft as part of the Winter 2013 Anime block.