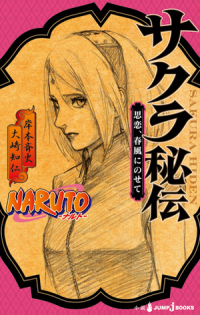 Sakura Hiden: Thoughts of Love, Riding Upon a Spring Breeze, written by Tomohito Ōsaki, is set a few months after the events of The Last. Sakura and Ino have opened a clinic within the Konoha Hospital that would assess and treat the mental health of children who have been affected by the Great War. The two kunoichi travel to the allied village of Suna after a request to offer their advice so that Suna can open a clinic of their own. Meanwhile, a mysterious man wearing a cloak and bearing a grudge against Konoha appears.