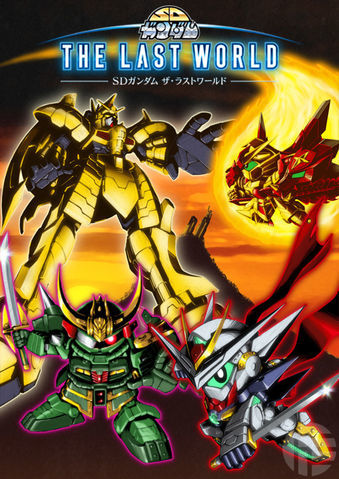 SD Gundam The Last World is a photonovel written by Makoto Ishii and Yasushi Takamura, and one of the launch titles for Sunrise's then-new web novel subsidiary Yatate Bunko.

In this world where all humans have disappeared, a golden Gundam named Gundam the Gold proclaims to all SD Gundams to have an all-out war in order to achieve each other's "G-Souls" in order to become more powerful.

The story is split into two arcs, called “Stages”. Stage One focuses on Sen-Pu Ninja Exia, an elite ninja who is suddenly thrusted into the battle over G-Souls while trying to figure out how to return to his own world. Stage Two focuses on Ryuutei Unicorn, a cocky god who was stripped of his power upon appearing in Tokyo and participates in the G-Soul fights to get it back.

You can read the series (in Japanese) here

Tropes associated with SD Gundam The Last World are: