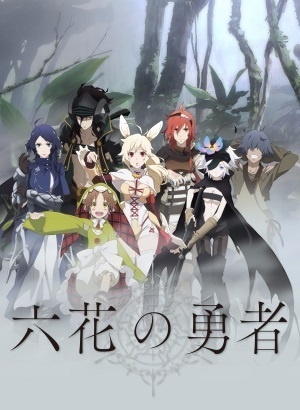 A light novel written by Ishio Yamagata, the author of Book of Bantorra. When the Demon Lord awakes, the Goddess of Fate chooses six Heroes and gives them the power to defeat him. The six heroes are marked by the crest of the Six Flowers, and are meant to convene at a certain location. As the day of the Demon Lord's revival nears, Adlet Mayer, a boy who calls himself the strongest man in the world, is chosen as one of the "Six Braves". Upon reaching the meet-up location, however, he discovers that there are seven Braves in total- meaning that one of them is a spy. The series follows Adlet and his interactions with his fellow Braves.

The series has run since August 25, 2011, is published under the Super Dash Bunko/Dash X Bunko imprint, and currently spans 6 volumes and one spin-off volume. A manga adaptation, published in Super Dash & Go!, ran from February 25, 2012 to November 20, 2014, and spans 4 volumes.

A 12-episode anime adaptation by Passione premiered as part of the Summer 2015 Anime lineup, which covers the entirety of the first volume of the light novel.

Due to the suspense and mystery nature of the story, be wary of spoilers.

The light novels and manga have been licensed and released by Yen Press.