Light Novel / Restaurant to Another World 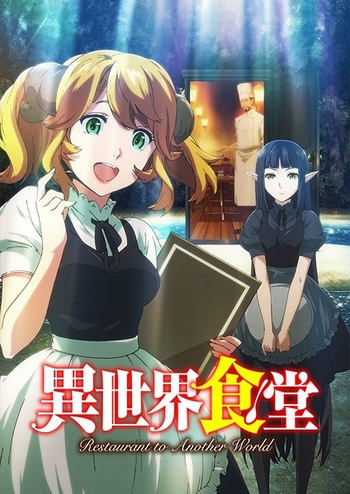 Restaurant to Another World (Japanese title: Isekai Shokudou) is a fantasy light novel series by Inuzuka Junpei. It received an anime adaptation as part of the Summer 2017 anime season, and a second season in Fall 2021. It is available for legal streaming with subtitles on Crunchyroll here

. The light novels were licensed by Seven Seas Entertainment with the first English-translated volume released on June 18, 2019.
Advertisement:

Hidden away in a poor corner of a city shopping district lies "Yōshoku no Nekoya", the Western Cuisine Cat Restaurant. At first glance, it's a small and unremarkable place, albeit with very good food, courtesy of the hard-working chef, known only as Tenshu (another word for "Master", a common thing to call chefs, bartenders and the like in Japan). On Saturdays, however, it caters to a very unusual clientele: the denizens of a fantasy world.

One evening, Aletta, a starving and homeless young demon girl, wanders into Nekoya after it's closed for the night and helps herself to some food. When Tenshu finds her the following morning, however, he's not at all angry. In fact, he offers her a weekly job as a waitress.

See Isekai Izakaya Nobu for a similar story about a Japanese restaurant from Earth with a door connecting to a Medieval fantasy world, serving delicious cuisine to a civilization with lesser culinary skills, and the restaurant owner/chef hiring a few women from said world as his waitresses.

Restaurant to Another World contains examples of the following tropes: