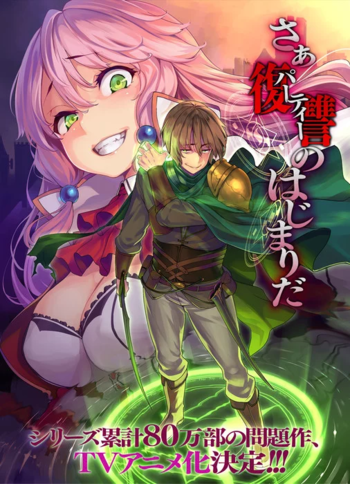 It's a familiar sight unfolding in a magical land: a trio of epic-level heroes are locked in an epic battle against a formidable demon lord. But who is that standing in the background, dressed in filthy rags, shackled in chains, a hollow expression on his face?

That's Keyaru, the "Healing Hero". Once a young apple farmer, he thought his dreams had come true when Flare—the leader of the Hero Party and Princess of Jioral Kingdom—came to his village to let him know that he, too, was a Hero endowed with skills transcending the limitations of mortals. Unfortunately for Keyaru, his talent lies in healing. Even more unfortunately, although he is capable of undoing injuries that normal healers cannot treat, it hurts him to do so. Most unfortunate still is the fact that the power structure in Jioral is unbelievably corrupt and tyrannical, and the so-called "heroes" are less a group of noble adventurers protecting the land from threats, and more an unbelievably powerful strike force for an aggressively expansionist land and its Evil Overlord. Deemed worthless as a person and only useful for his powerful healing, Keyaru is Made a Slave and fed an extremely powerful drug that dulls his reasoning and leaves him desperate for more. In this sorry state, he is exploited and abused—physically, mentally, and sexually—by the three "Heroes".

Four years pass, until one fateful day, Keyaru acquires a particular skill: Drug Resistance. Moreover, it turns out that Keyaru's skillset is far from being limited to just healing. Indeed, you can do some interesting things with healing magic. Lots of things. As the demon overlord's might overwhelms the party, instead of healing them, Keyaru leaves them to die, kills the demon himself, claims her heart—an unbelievably powerful magical reagent—and "heals" the world itself, rewinding time to end up before he was ever recruited by Flare, and with all his memories intact.

Now, he can simply...not join Flare? Live out a simple and happy life in his village? Yeah, no. Besides, that's just not the kind of person Keyaru is. Not anymore. Now, he is out for revenge—brutal and absolute—against anyone who has ever wronged him.

Redo of Healer, known in Japan as Kaifuku Jutsushi no Yarinaoshi ~ Sokushi Mahō to Sukiru Kopī no Chōetsu Hīru ~ (回復術士のやり直し～即死魔法とスキルコピーの超越ヒール～), literally The Healer’s Do-Over: Transcendent Healing Through Insta-Kill Magic and Skill-Copying, is a Light Novel by Rui Tsukiyo (The World's Finest Assassin), adapted into a manga. It's notable for containing an incredibly evil protagonist and gratuitous amounts of sex, rape (of the physical and psychic varieties), violence, and other horrific acts.

It got a spin-off manga named Kaifuku Jutsushi no Omotenashi (Hospitality of Healer) which is an alternate take on the story where after traveling back in time, Keyaru decided to abandon his plans for revenge after realizing everyone is good and peaceful and instead opens up a cafe.

Compare to The Hero Laughs While Walking the Path of Vengeance a Second Time, another Light Novel starring a hero who, after being betrayed and receiving horrible abuse, becomes a Villain Protagonist with a harem and seeks revenge on the princess and all the other heroes who wronged him. Contrast with The Rising of the Shield Hero, where a Stock Light-Novel Hero set up for failure manages to hold on to enough of his moral compass to become a Good Is Not Nice Knight in Sour Armor while still getting in some well-deserved vengeance.