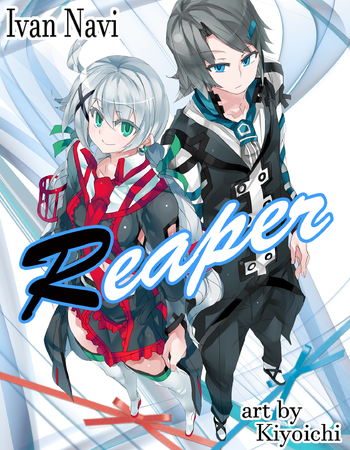 Don't Fear The Reaper
"Some, such as Anubis, Dullahan, Xolotl, and Valkyrie are figures of legend, and then there is Pax.
— The Narrator
Advertisement:

Reaper is an English-language prose written in the tradition of the Japanese light novel. It is written by Ivan Navi

, edited by Yosuke Imagawa, and illustrated by Kiyoichi.

The story follows Pax, a grim reaper on vacation as a human in order to get a better grasp of humanity. Things get a little out of hand when he meets Softi, a girl with an odd power. They quickly find themselves embroiled in a centuries-old magical conspiracy involving magicians, other reapers, and Life & Death.