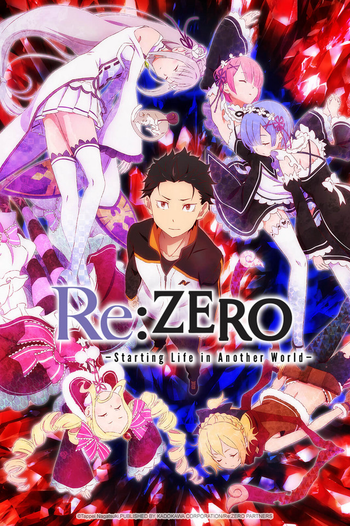 The only thing worse than dying once is having to die again.note Center: Subaru Natsuki, Clockwise from top-left: Emilia, Puck, Ram, Rem, Felt, and Beatrice.
Let us start here... from zero.
—Rem
Advertisement:

Subaru was an Ordinary High-School Student on his way back from a snack run one day, when he suddenly finds that he's not in Japan anymore. When he looks around, he realizes that he's in an archaic fantasy universe. Luckily, he lands in a populated town. Unluckily, it's not all that safe. His life is saved thanks to the efforts of a half-elf named Satella. Subaru decides to repay her by helping Satella recover a trinket that was stolen from her, and begins to develop feelings for her as they spend time together.

And then they're both murdered.

And then Subaru wakes up exactly where he was when he first appeared in the fantasy world.

Subaru eventually realizes that every time he dies, he goes back to a certain "checkpoint" in the story. Once he's dealt with the threat to his life, he tries to live peacefully in this new world until a new threat arises and a new checkpoint is established. Unfortunately, every time a threat is dealt with, the checkpoint is immediately established, so if Subaru can't deal with whatever is threatening him without undesired consequences, he's stuck with them.

Despite the fantasy premise, it soon becomes apparent that the series is a Psychological Horror thriller, and that there's going to be less swordfighting and action and more death and despair.

The light novel series, written by Tappei Nagatsuki, was adapted for the Spring 2016 Anime season and is being directed by Masaharu Watanobe and animated by White Fox; a second season was announced at AnimeJapan 2019 and was originally set for an April 2020 release, but was delayed to July 2020 due to the COVID-19 Pandemic. The published version of the light novels has been licensed for publication in the west by Yen Press. People who can read Japanese can read the original web novel here

No relation to Aldnoah.Zero, Fate/Zero, Re:CREATORS, ReLIFE or Re-Kan!.