Light Novel / Rascal Does Not Dream of Bunny Girl Senpai 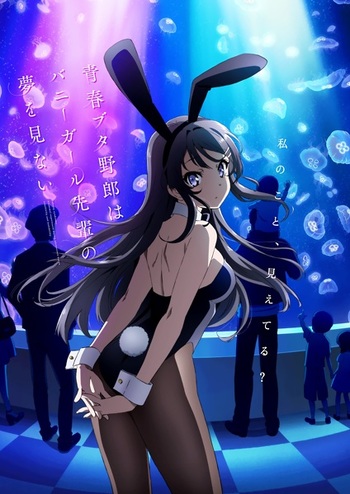 An ecchi about a bunny girl? No, it's Not What It Looks Like...
Sakuta Azusagawa's life takes a turn for the unexpected when he meets teenage actress Mai Sakurajima after she wanders into a public library while dressed in a sexy bunny suit and realizes only he can see her. Mai admits she has taken a hiatus from her acting duties and has been attempting to live a normal life, but people are unable to see her, except for Sakuta, who is no stranger to this phenomenon, which he calls "Adolescence Syndrome". Sakuta decides to solve this mystery while continuing to get closer to Mai and meeting other girls who suffer "Adolescence Syndrome" as well.
Advertisement:

Rascal Does Not Dream of Bunny Girl Senpai (Japanese: 青春ブタ野郎, Seishun Buta Yarō wa Bunny Girl-senpai no Yume wo Minai) is a light novel series written by Hajime Kamoshida and illustrated by Keeji Mizoguchi. It is published by ASCII Media Works under their Dengeki Bunko imprint since April 2014 and has spawned 10 volumes so far. An Animated Adaptation by CloverWorks premiered on October 4, 2018. The sequel film, Rascal Does Not Dream of a Dreaming Girl, which focuses on Shoko Makinohara, premiered in Japan on June 15th, 2019 and premiered in the US at Anime Expo on July 7th while Aniplus Asia will be screening the movie in Southeast Asia. Yen Press also announced at Anime Expo that the light novels had gotten licensed for release starting in 2020. The Blu-Ray and DVD for the film released in Japan on November 27th.

Rascal Does Not Dream of Bunny Girl Senpai provides examples of:

"Are you on your period?"

Dude, seriously, even if she IS actually having her period, you do NOT ask a girl such a personal question!

Example of:
All Periods Are PMS

"Are you on your period?"

Dude, seriously, even if she IS actually having her period, you do NOT ask a girl such a personal question!