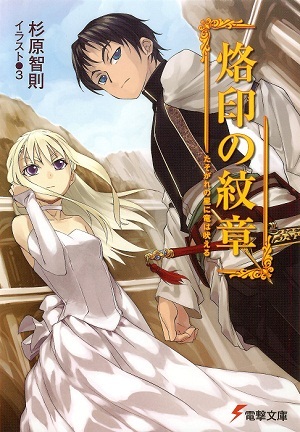 In the distant future, on a planet colonized by Earth, two countries have waged war with one another for ten years. To put an end to the fighting, the royal families of Mephius and Garbera have arranged a political marriage. The wastrel Prince Gil of Mephius, faced with impending marriage and the scorn of his father, goes on yet another drug-addled romp in town and never returns. The only witness to his true fate is the merchant Fedom who sees in it an opportunity.

Not long after the war started the peasant boy Orba was displaced from his hometown by Garberan soldiers and witnessed his fellow refugees slaughtered by Mephian soldiers. Forced into a life of crime, Orba was eventually jailed where his unusual resemblance to the Prince was noted. Fedom arranged for Orba to be made into a gladiator and hid his face while looking for an opportunity to exploit it. With the Prince gone, Fedom offers Orba freedom in exchange for acting as a body double, supposedly due to fear of assassination.

Unknown to Fedom, Orba has his own purpose in taking on the role of Gil: To find his missing family and take revenge on Mephius for his suffering. His plots are complicated by the arrival of Princess Vileena of Garbera, who for the good of her homeland aspires to control her husband, and through him Mephius. And both must deal with plots by factions within both their nations and without which conspire to reignite the war.

Also known as "Emblem of the Branded", this Light Novel series by Tomonori Sugihara is complete at 12 volumes. "Tales of Leo Attiel; Depiction of the Headless Princess" is a 4 volume Light Novel taking place in the same world.