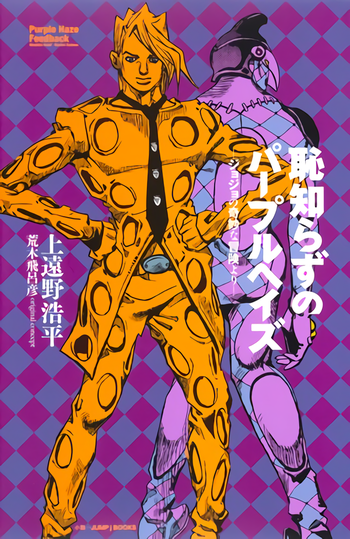 The boy's name is Pannacotta Fugo. There are those who call him a traitor, those who dismiss him as one without shame. His choices will decide what his fate will be.
Advertisement:

Purple Haze Feedback (恥知らずのパープルヘイズ Hajishirazu no Pāpuru Heizu, or literally "Shameless Purple Haze") is a 2011 light novel written by Kohei Kadono (of Boogiepop Series fame) and illustrated by Hirohiko Araki. It was released as part of the Milestone Celebration "VS JOJO" projectnote where various authors wrote light novels set in the world of JoJo, all illustrated by Araki, and it is considered of dubious canonicity.

Purple Haze Feedback is set six months after the events of JoJo's Bizarre Adventure: Golden Wind in Italy. The protagonist Pannacotta Fugo, one of the side-characters of the manga who left the protagonists as they rebelled against the former Boss of the gang Passione. Fugo is contacted by Guido Mista, now the no. 3 of Passione, who orders him on Giorno's behalf to prove his loyalty to Passione by taking out the root of Passione's drug: the dreaded narcotics team, a Ragtag Bunch of Misfits led by a certain Vladimir Kocaqi. Fugo, alongside his two assigned partners Sheila E. and Cannolo Murolo, tracks the narcotics team up to the heart of their territory, Sicily.

The story also details Fugo's backstory and his outlook on life shaped by his environment. In the end, Fugo manages to tame his Purple Haze and becomes at peace, swearing loyalty to Giorno.