Light Novel / Problem Children Are Coming from Another World, Aren't They? 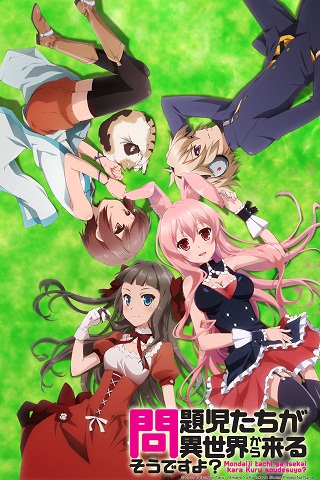 Problem Children are Coming from Another World, aren't they? note  Mondaiji-tachi ga Isekai Kara Kuru Sou Desu yo?, or just "Mondaiji" is a fantasy light novel by Tarō Tatsunoko. The series is split into two parts; the first under this name was completed in 2015 with twelve volumes, while the second is currently running since under the name Last Embryo.

Three problem children - Izayoi Sakamaki, Asuka Kudou, and You Kasukabe - suddenly receive an invitation to another world known as "Little Garden" from a girl called Black Rabbit (Kurousagi). Battles, laughter, sex appeal... anything goes in this new tale of adventure!

Released as part of the lineup for the Winter 2013 Anime season, the anime adaptation is currently streaming on Crunchyroll.

Compare with No Game No Life, another Trapped in Another World light-novel/anime about a world that runs on games.

Problem Children are Coming from Another World, aren't they? provides examples of: