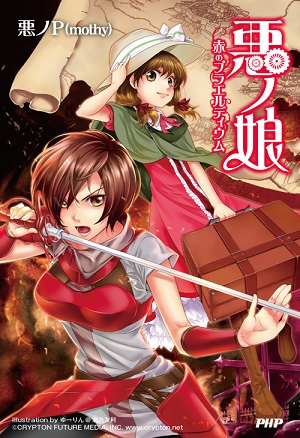 The Daughter of Evil: Praeludium of Red is the third Light Novel in The Daughter of Evil Light Novel series of the Evillious Chronicles franchise, a part of the Story of Evil series within said franchise. It was written by the Japanese producer Akuno-P (mothy) and illustrated by Ichika (with the cover done by Yuurin), released 2011.

The story takes place years after Clôture of Yellow and Wiegenlied Of Green, with Lucifenia made a territory of the increasingly imperialist Marlon and tensions rising between the kingdom and Beelzenia. The story centers on the now-more-grown Yukina Freezis as she sets out to investigate the truth behind the events of the last two novels and the Demons of Sin, meeting up with old friends and new along the way. The story also focuses on King Kyle, who seems to have become far crueler a king than in the last two novels…

This novel is the first that delves into the larger "conspiracy" of the Story of Evil as alluded to in the first two novels; it also makes several allusions to the story of Banica Conchita, the first half taking place in Beelzenia. It’s followed by the light novel Praefacio Of Blue. The website for the novel can be found here

(note, however, that it's all in Japanese) and is available on Amazon. An unofficial English translation can be found here