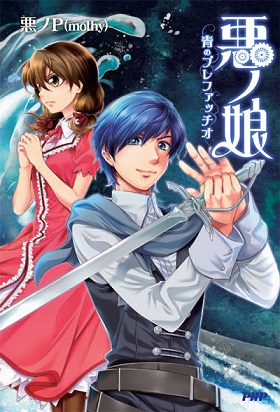 The plot follows where the previous novel Praeludium Of Red left off, with Kyle, Yukina, Germaine, and Gumillia traveling to Marlon to learn about the evil that had been afoot in Evillious over the last five years. Told mostly through Kyle’s point of view, the story focuses on him coming to grips with several dark secrets about his own family and already horrible mother as he and Yukina unravel their conspiracy.

As in Praeludium, Yukina is also a Point of View character in certain points of the novel, and during the final stretch she discovers some nasty family secrets of her own. The story’s conclusion is expanded on in Epic of Evil: The Daughter of Evil Fanbook, with its consequences carrying on into the Gift From The Princess Who Brought Sleep novel. The website for the novel can be found here

(note, however, that it's all in Japanese) and is available on Amazon. An unofficial English translation can be found here