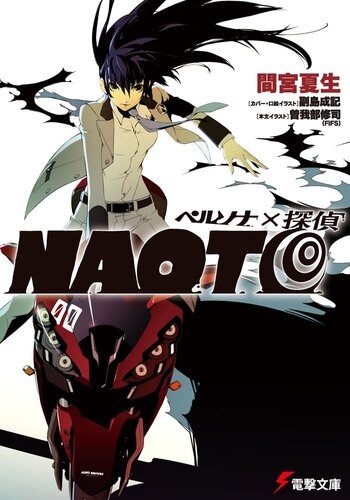 Persona x Detective NAOTO is a Light Novel set one year after the events of Persona 4.

Naoto Shirogane is called on by Touko Aoi, a detective she's idolized for years, concerning the disappearance of two high school students in the city of Yagokoro. Shortly after arriving at their police department, she gets caught up in the rampage of a defective Anti-Shadow Suppression Weapon known as Genesis. This near-death experience gives Naoto's Persona a new form, Amatsu-Mikaboshi. When she regains consciousness, she is told that Genesis - who insists on going by the name Sousei Kurogami - will be her partner for the investigation.

Going undercover at Yagokoro's high school, it's not long until Naoto learns that the missing students are connected to something bigger: a mysterious online poll known as the Midnight Site, where users publicly post information concerning victims of Malicious Slander. Shortly after one of these unlucky people commits suicide, a high-ranking detective disappears...and that's when the administrators of the Midnight Site begin turning up dead. It's up to Naoto and Sousei to track down the rest and draw their killer out of hiding.

This consists of a light novel and a 2-volume manga adaptation. It was only released in Japan, but a translation of the LN can be found here