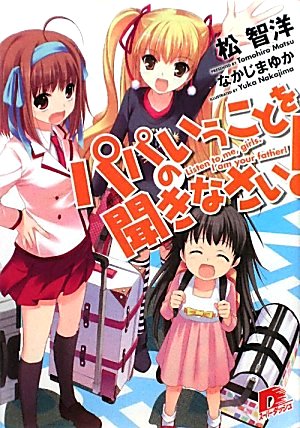 Left to right: Sora, Miu and Hina. From the Light Novels, Volume 1

Nineteen-year-old Yuuta Segawa has just entered college as a freshman at the Literature Department of Tama University, which is a feat as far as he is concerned. Until three years ago, he was living with his older sister Yuri, who has been his mother-figure ever since their parents died back when he was a child and she a high-schooler. They'd spent years together, with Yuuta loving her fully and Yuri having given up on her outside life for his sake. All that changed when she married Shingo Takanashi, a middle-aged man with two daughters from previous marriages — Yuuta left her side, partially out of disapproval over her husband, but now that past hurts have healed, Yuuta thinks it's high time he repays Yuri's kindness by letting her be happy with Shingo and set off on his own as an independent young man.

One day, however, he receives bad news: Yuri and Shingo disappeared together with the plane they were in while they were on vacation. After a hasty funeral, Yuuta's relatives began arguing over custodianship and distribution of the three daughters Yuri and Shingo — the youngest of which is their only true child — left behind. Yuuta, baffled by their disregard as to how the girls, closely-knit though born of different mothers, would feel about this, decides to man up and adopts them all.

Yuuta's life has definitely made a turnaround: from an independent young man to an adoptive single father to three girls — Sora, a fourteen-year-old middle-schooler with an awkward approach to relationships; Miu, a ten-year-old elementary schoolgirl who's a bit daring for her age; and Hina, the youngest at three years old and Yuuta's only fully blood-related niece. Despite the hardships of his new life, Yuuta, with some help from his friends at the Street Observation Research Club — portly Club President Shuntarou Sako, his handsome best friend Kouichi Nimura, and buxom college sweetheart Raika Oda — vows to persevere and prove himself worthy to be his nieces' legal guardian.

Papa no Iukoto o Kikinasai! (Listen To Me, Girls. I am Your Father! or Listen to What Papa Says!) or just Papakiki!, the official shortened title, is a 2009 Light Novel series written by Tomohiro Matsu and illustrated by Yuka Nakajima (Digital Lover), having ended on March 2015 with 18 volumes published by Super Dash Bunko, owned by Shueisha. As of present it is one of Japan's bestselling light novels, and has spawned six manga adaptations aimed at various demographics and an Animated Adaptation aired from January to March 2012, 12 Episodes.

For those in the US, the anime series can be legally viewed at Crunchyroll

These character-centered adaptations occur at different time periods, spanning weeks to months before or after Yuri and Shingo's disappearance, so they rarely overlap with each other; a fan made guide can be found in the trivia tab.

Apart from the these semi-canonical adaptations, the Papakiki! series was also made into a game, a Dating Sim relased for the Playstation Portable; with the theme of course being Yuuta developing his nieces' affection towards him, Raika is also an available choice, none of the four girls grow to love Yuuta as a man, though, the scenario aims for a more innocent aproach. Love for a father-figure, and love for a great friend.

A Character Sheet is available, please place character specific tropes in there.

Baka-Tsuki has a translation project

for the Light Novels.

Papa no Iukoto o Kikinasai! provides the examples of: