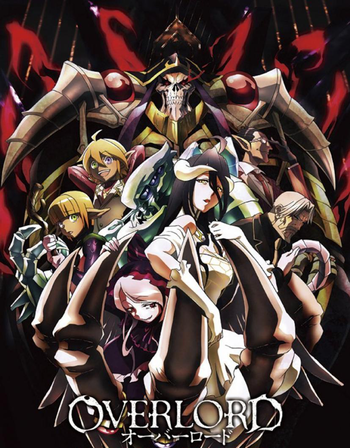 Overlord is a Japanese web novel written by Kugane Maruyama. It has been adapted into a light novel published by Enterbrain and illustrated by So-bin, a monthly manga by Miyama Fugin, and a Summer 2015 anime series produced by Madhouse. A second season aired starting January 2018 and a third in July 2018. A fourth season and a movie, collectively covering light novel volumes 10-13, were confirmed in May of 2021 to air July 2022.

Its story begins on the last day of a once popular virtual reality Massively Multiplayer Online Role-Playing Game called YGGDRASIL. One of the game's dedicated guildmasters, a salaryman known as "Momonga", decides to remain logged in until the servers are shut down. However, instead of being logged out at the scheduled time, Momonga finds himself stuck in the body of his in-game avatar, a skeletal lich who serves as the Evil Overlord of a tomb of monsters. Before long, the Non-Player Characters begin coming to life and exhibiting personalities of their own as well, and Momonga's entire guild is seemingly transported to a new world.

Having no parents, friends, or other connections in the old world, Momonga decides to take the name of his guild, "Ainz Ooal Gown", and make this new reality his home. Even if that means taking it over.

The TV airing of the anime was accompanied by a series of comedic web shorts. Titled Ple-Ple-Pleiades~!, these focused on Momonga's interactions with Nazarick's Quirky Miniboss Squad, the Pleiades Combat Maids, who, barring Narberal Gamma, were never given ample focus in-series. Each web short focused on a particular Pleiades, and detailed their race and personalities.

Both the original light novel and the manga adaptation have been licensed by Yen Press.

Not to be confused with the video game series Overlord or the film of the same name. A video game adaptation of this series was eventually released in July 2019... and it was, of all things, a Picross game.

A Turn Based RPG for mobile, Overlord: Mass for the Dead had its Japanese release in 2019 and 2020 for English.

A Metroidvania game for Steam and Nintendo Switch, Overlord: Escape from Nazarick is slated for a 2022 release. The reveal trailer can be found here

The main characters are part of the parody crossover Isekai Quartet, alongside the casts of KonoSuba, Re:Zero, Saga of Tanya the Evil, and as of the second season, The Rising of the Shield Hero.