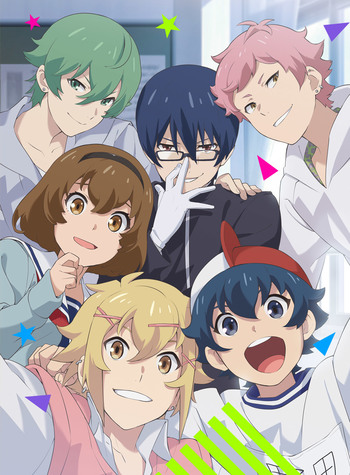 The adventures of the Hero Club start here!
Mizuki Hijiri's hopes for a peaceful high school life are dashed when she transfers into a new school and gets entangled in the shenanigans of the Hero Club, a group of students affected by chuunibyou syndrome. Her new friends include superhero fan Yamato Noda, 2D-girls obsessed otaku Tomoki Takashima, the supposed "reincarnation" of an angel or a devil Kazuhiro Nakamura, and self-proclaimed schemer Rei Tsukumo. The Hero Club has decided that Mizuki is one of their own and involve her, often against her will, in their activities to help other students with their problems.
Advertisement:

Outburst Dreamer Boys is a light novel series inspired by Vocaloid producer rerulili's song "Outburst Dreamer Boys" (Chūbyō Gekihatsu Boy), written by Minato Tonami with illustrations by Hojima. The series under its original name ends at 5 volumes, but it received a continuation, Outburst Dreamer Boys: Youth Syndrome, in 2018, named after the original song's own sequel composition "Youth Syndrome" (Seishun Shokogun). This series was instead illustrated by Coffee Milk. A third series began in 2020 under the subtitle Pride Supernova (Pride Shoushinsei).

An anime series produced by Studio DEEN premiered on October 4, 2019 in the Fall 2019 anime season. It ran for 11 episodes on television, with the final episode included in the series' home video release.

The anime is available for Streaming on HiDive.