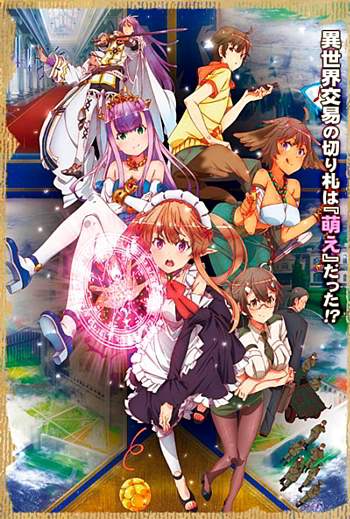 Shinichi Kanou is an otaku that has recently quit his NEET phase. When he finally gets a job, it is in another world where dragons soar through the skies. Shinichi find himself employed as a cultural attache of a Japanese diplomatic mission to the fantasy kingdom of Erdant. His mission is to bring "otaku culture", a novelty in the kingdom, to facilitate effective commerce between the two countries. As an expert in anime, light novels, manga, and dating sims, Shinichi is revered and admired in the new world, and an unexpectedly fulfilling real life awaits him!

Will "moe" change the world, or bring its destruction?

Outbreak Company is a light novel series written by Ichiro Sakaki (of Scrapped Princess, Strait Jacket, and Magician's Academy fame), consisting of 18 main books plus one sidestory. An anime adaptation aired as part of the Fall 2013 Anime season, with a semi-original storyline which compresses and rearranges the events of books 1-4 and 7 into something less episodic.

Compare Gate - Thus the JSDF Fought There, where the military route is taken instead of diplomacy.