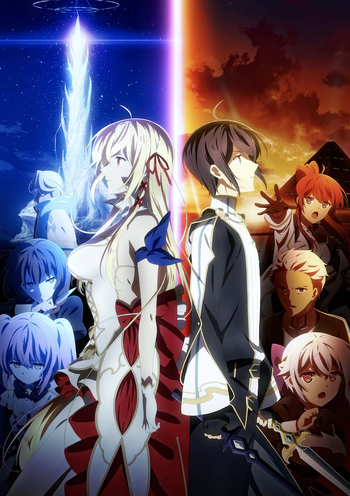 What attracted me... was you, my 'enemy'.
Advertisement:

For 100 years, a great war has raged on between the scientifically advanced Empire and a paradise of witches known as the Nebulis Sovereignty. This century-old battle sets the scene for a fateful encounter between two young combatants: an imperial swordsman, Iska, and the witch princess, Aliceliese. As sworn enemies, they vow to cut each other down to unite their worlds, and yet Iska finds himself entranced by her beauty and righteousness, while Aliceliese is moved by his strength and resolve. In the midst of a never-ending war that forbids them from being together, they have no choice but to destroy each other-or can they find another way?

Our Last Crusade or the Rise of a New World (キミと僕の最後の戦場、あるいは世界が始まる聖戦, Kimi to Boku no Saigo no Senjō, Arui wa Sekai ga Hajimaru Seisen) is a Japanese Light Novel series written by Kei Sazane and illustrated by Ao Nekonabe. Fujimi Shobo, under Kadokawa Corporation, has published seven volumes since May 2017 under their Fujimi Fantasia Bunko label. A manga adaptation by okama began serialization in Hakusensha's Young Animal magazine in May 2018. Both the light novel and manga have been licensed in North America by Yen Press. An anime television series adaptation by SILVER LINK. premiered in October 2020.

A second season of the anime was announced on October 1, 2021.

Our Last Crusade or the Rise of a New World provides examples of:

Alternative Title(s): Our Last Crusade Or The Rise Of A New World