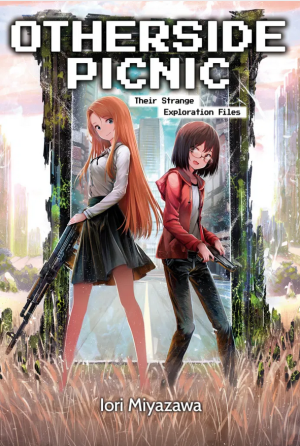 Toriko (left) and Sorawo (right)
It was the third time that Sorawo Kamikoshi crossed the door she found into the mysterious, unearthly place she dubbed the "Otherside," and the first time she planned to explore beyond just the immediate surroundings. One encounter with an eldritch creature later, and she's facing the humiliating prospect of drowning in a few centimeters of water... until a woman appears. Toriko Nishina is outrageously beautiful, seemingly fearless, and, frankly, a bit of an oddball, but she's able to save Sorawo, both from her "lie-down bath of death" and from an unknowable creature straight out of an urban legend. After a little bit of persuasion (and a promise of cash for her trouble), Sorawo agrees to accompany Toriko on her artifact-hunting expeditions in the Otherside. However, cash isn't actually Toriko's primary motivation: it seems that she's trying to find her friend and mentor who's missing in the Otherside...
Advertisement:

for Winter 2021 as animated by Liden Films, with Funimation picking it up for English distribution. It began airing on January 4th, 2021.