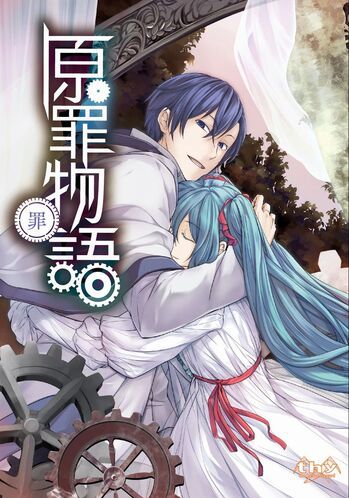 Original Sin Story: Crime is a Light Novel in the Evillious Chronicles franchise, written by the Japanese producer Akuno-P (mothy) and illustrated by ichika, released December 2019.

The story expands on the songs of the Original Sin Story Act 1 album, primarily "Project 'Ma'," "Escape of the Witch, Salmhofer," and "Moonlit Bear". In the Magic Kingdom Levianta, before the creation of the Seven Deadly Sins, the queen Prophet Alice Merry-Go-Round was forced to give up her twin children by the senate, children whom she claimed were meant to be the vessels for the dragon god, LeviaBehemo. Now she prophesies that the senate must pay for their mistake, and artificially recreate the "Twins of God" by selecting a virgin witch to carry them to term. And so Project 'Ma' begins, amidst a backdrop of political intrigue and those who want to use the project for their own ends, among them the vengeful long-lost son of the queen, Adam Moonlit.

The story covers the disastrous first and second Projects and their aftermath, expanding on the world of Evillious before the Levianta Catastrophe completely changed the cultural landscape of the region. It is to be followed by Original Sin Story: Punishment.