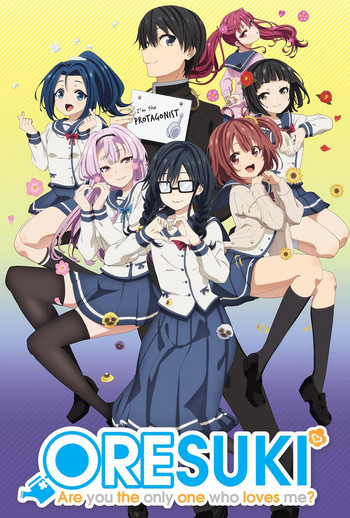 A "normal" harem.
Ore wo Suki Nano wa Omae Dake Ka Yo— translating to “Are You the Only One Who Loves Me?” and shortened to Oresuki—tells the story of Amatsuyu Kisaragi, AKA “Joro”. Joro is an average high school boy, kind and sincere, like a typical light novel protagonist, or at least that’s how he acts in hopes of attracting the attention of the girls he's interested in. Specifically, he’s trying to win the affections of Aoi Hinata, AKA “Himawari (Sunflower)” and/or Sakura Akino, AKA “Cosmos”. One day both girls sit alone with him on a bench to confess… that they’re in love with his best friend Taiyo Ooga AKA “Sun-chan”, and they want him to help them. While he’s reeling from this, he gets yet another surprise as Sumireko Sanshokuin AKA “Pansy”, the unattractive library girl with an annoying attitude, reveals that she, alone, is in love with him (and has been stalking him for some time). Thus begins a twisted romantic comedy filled with twists and turns, betrayals and manipulations.
Advertisement:

Oresuki is a light novel series written by Rakuda and illustrated by Buriki, which were published from 2016 to 2022 for a total of 17 volumes. An anime adaptation produced by Connect (a subsidiary of SILVER LINK.) aired in 2019, with the series composition and episode scripts written by Rakuda. The anime’s OVA released in 2020, and is the last project that Connect would work on as an independent entity before being dissolved and absorbed back into its parent company.