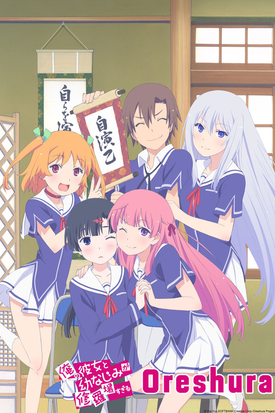 Full Title: Ore no Kanojo to Osananajimi ga Shuraba Sugiru (Literally "Caught In the Battlefield Between My Girlfriend and My Childhood Friend").

Eita Kidou is an Ordinary High-School Student who wants to become a doctor to help his childhood friend Chiwa Harusaki, who found herself unable to practice kendo after an accident. To achieve this goal, he shuns love, despite Chiwa's advances, partly due to his own past of being abandoned by his parents after their divorce to pursue new romances (forcing him to live with a relative).

One day, however, along came a transfer student who has just returned after nine years in Sweden. Masuzu Natsukawa, the transferee, instantly becomes the school's most popular girl. Annoyed by all the confessions she receives, she approaches Eita with a deal to pretend to be her boyfriend. When he refuses, Masuzu shows him his most embarrassing secret — his notebook detailing his junior-high delusions of grandeur — and uses it to blackmail him into compliance... and he's not allowed to tell Chiwa about the deal.

Not knowing that Eita isn't dating Masuzu by choice, Chiwa aims to become popular to get back at him... and fails. Finding her attempts to be yet another annoyance, Masuzu starts a club about becoming popular.

Adapted into an anime for the Winter 2013 Anime season, it can be watched on Crunchyroll

if you live in the U.S., Canada, the United Kingdom, Ireland, Australia, New Zealand, or South Africa.